Every summer for the past 14 years the Pratt Museum sets up a remote video camera at Gull Island. At first it was used as a study aid to observe the birds in a count that they were conducting on the island. Now anyone can use it to have a look around. As they were setting up the camera I had a chance to have a look around myself. Lots of Murres.

Friday we took the Torega out of the water so that we could do its annual maintenance. Also, every two years the Coast Guard needs to inspect the hull. Here is the story about that:

Tuesday the boat went back in the water just in time for me to check out the shorebirds. Every year for the past six years I have been part of a citizen science project counting and identifying shorebirds as they pass through Kachemak Bay during the spring migration. We count them every five days from mid April through the end of May. I did not expect to see much since it is still early in the migration. However, I did see one Black Oyster Catcher at Gull Island and four Surfbirds at 60′ Rock. I usually don’t see Surfbirds till May so these were a little early. 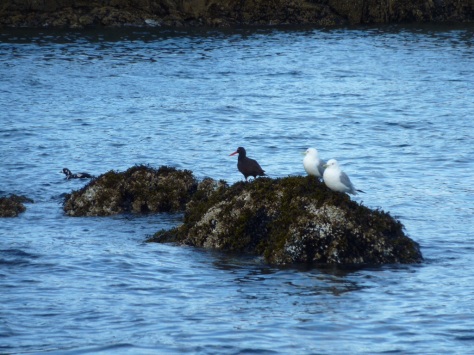 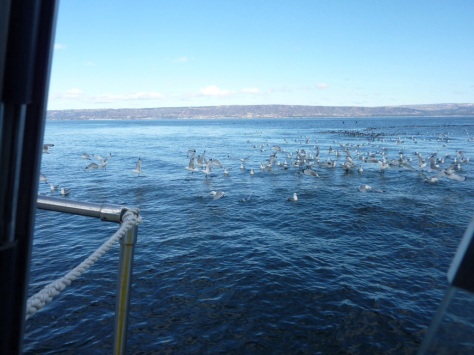 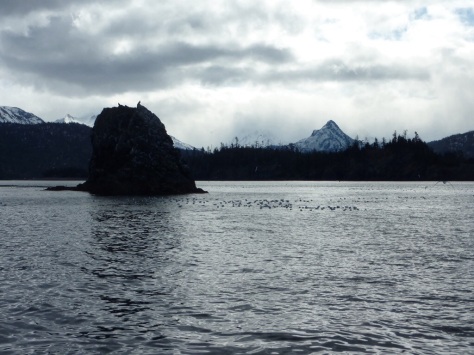 One of the state ferries on the way into the harbor, the musty, rusty, trusty Tusty at the dock. 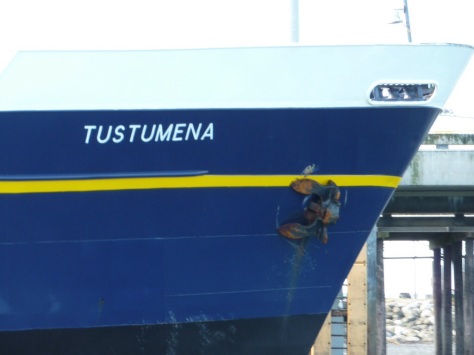 Here is the list of birds spotted on the trip:

This time of year I do some trips to Peterson Bay taking students to the Center for Alaskan Coastal Studies. They come from all over the state of Alaska. This particular group was from Valdez. Here is some of their stuff loaded on the boat.

Not all days are nice blue sky days. Today was overcast with about 20 knots from the SE. I picked up someone at Bear Cove and this is a shot of the state ferry Kennicott at the dock as I was coming into the Homer Harbor. 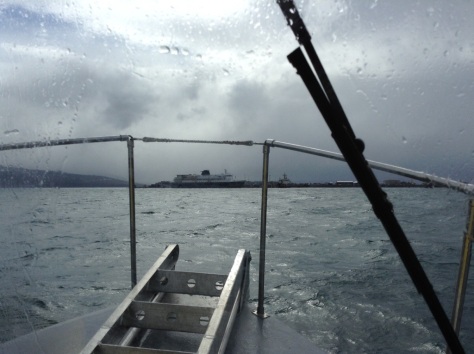 Another nice clear day but cooler and windy compared to the last couple of weeks. Had one to pick up. Last year he fell through the ice so I was glad to see him coming down the trail. Bear Cove is about as far as I go. It is 15 miles up the bay. Here is what it looks like heading into the cove. 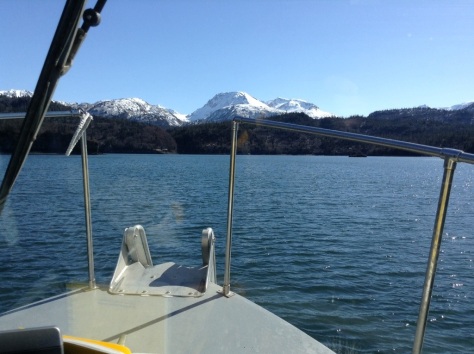 Here is Ted Pedersen’s grave site on a little island about halfway into Bear Cove. He homesteaded and lived there for many years.

Ok, one more. It was such a gorgeous day heading up there. This shot was taken about half way up to Bear Cove.

Headed over to pickup the CACS staff. They are getting ready for the season so are training staff. Another nice day on the water. Clouds are beginning to move in but there is very little wind associated with it. That is good. Often this time of the year we get a lot of storms moving through as we transition from winter to summer. Noted a large number of Murres at Gull Island. The Kittiwakes have been there for some time. Lots of juvenile Bald Eagles there also. There must have been good survival rates due to the mild winter.

Wow! Is it really 20 years since I first started this business? Anyway, I think it is time to share a little bit about what I do here in Kachemak Bay. So, we are starting a Captain’s log. I can’t say that I will be able to update this every day but we will make the attempt.

First a little history about the business. I started in 1994 with a 20 foot six-passenger boat. After about eight years running myself ragged I decided it was time to go with a bigger boat for more passengers. That entailed getting the Coast Guard involved as they need to inspect the boat as you build it and then annually thereafter. It took me and many friends about seven months of work to completely renovate an old fiberglass hull. It was well worth it though. The Torega is a Coast Guard inspected boat certified for 15 passengers. Initially it was conceived as mostly a water taxi boat with a ladder off the front to get people on and off beaches. Recently I have been doing more tours and especially bird tours as that is one of my interests. The business also does marine wildlife and photography tours as well.

We will update frequently with highlights of the day and a listing of birds and marine mammals that we see. Please let us know in the comments section of any additional things you would like to see in the captains log. Here is a view of the office. 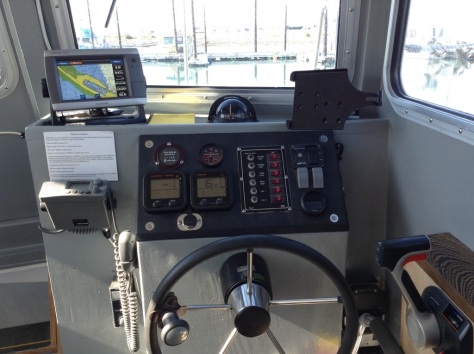