Sitting in the harbor waiting for people. Morning is the best time to be on the bay. 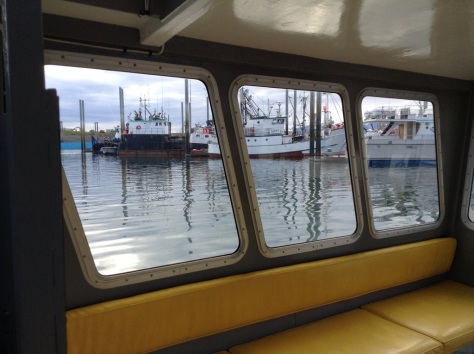 Still waiting for people to show up.

It is not often this calm on the way to Bear Cove.

Starting today the daylight goes away and it will be winter before we know it. It takes awhile though and won’t really be noticeable till August. By mid September we lose light at the rate of seven minutes per day. That is three months away so we will enjoy summer while we have it.

It has been two days since the last bird trip. We saw some Aleutian Terns but we didn’t get close looks today like we did last week. There were more Murrelets showing up including these two Kittlitz’s Murrelets.

They were very close to the boat and everyone got good looks till they did this. 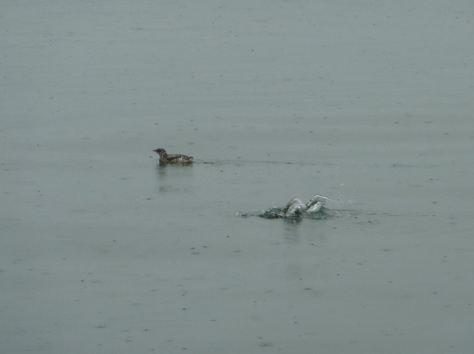 We also saw a pair of Common Loons also very close to the boat.

Why don’t Yellow-billed Loons do that. I likely saw one on this trip but it was a ways away and I couldn’t get close enough to it to make a positive ID. We waited for ten minutes looking in all directions and never saw it again.

There were not as many birds at Gull Island as sometimes and we were unable to locate any Horned Puffins on the water. There is a rock crack where one has been nesting for at least the last 20 years and I see it there almost every trip but don’t point it out unless it is facing out so you can see the bill. Today all I could see was the rear end and there was no way to tell what it was for sure unless you knew that is where it nests.

I have just arrived home after spending over 12 hours on the water. Not every day is like that but some are…

The last week we had bird trips every day. Highlights included a Sabine’s Gull. Usually when you see a small black headed gull in Kachemak Bay you assume it is a Bonaparte’s. I see Sabine’s Gulls every year, usually single birds but sometimes small flocks of up to 30. This one was unusual since it occurred here in mid June. Most of the ones I have seen in past years are in late July and early August.

We have also had big tides the last week with lots of debris in the water. Aleutian Terns will perch on just about anything that floats.

Sometimes you see more than one.

We had good looks at them on every trip last week.

Some had a little extra help. 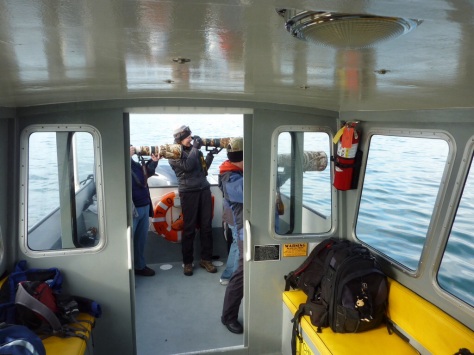 You don’t often see a flock of loons. 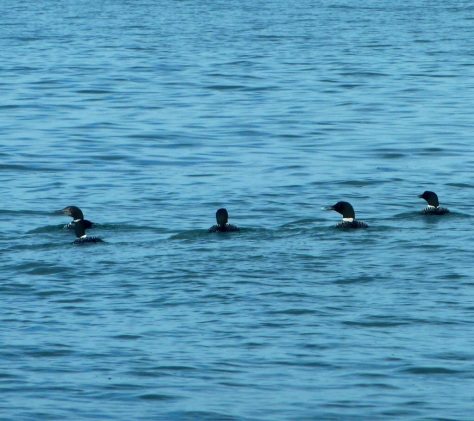 It was also a good week for sea mammals other than sea otters (there always lots of sea otters). Here are four Steller Sea Lions at Gull Island.

And the highlight for the week. Killer Whales!!! 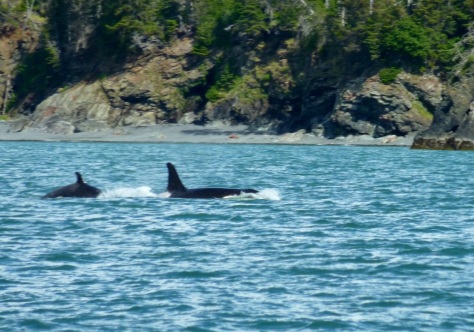 It was uncertain as to how many there were. The estimate was between eight and twelve. They can be hard to count. 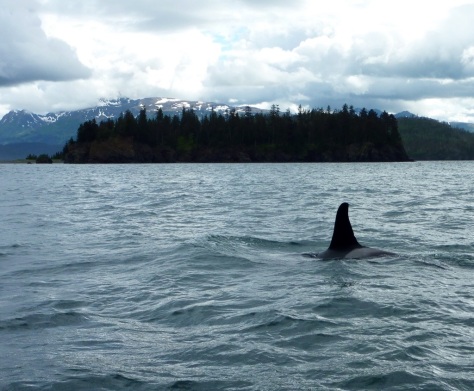 It was a good week to be on the water. Winds one day were predicted to be 30 knots. Here’s what it actually looked like. No wind at all.

There were not as many Murrelets and Kittlitz’s Murrelets were spotted only once. The Yellow-billed Loon also has disappeared for the time being. Here is the list for the last five bird trips.

After having an incredibly warm April and May we are back to our normal weather for this time of year with temperatures reaching the mid 50’s if we are lucky and dropping down to about 40 at night. Yesterday we had rain on and off. Mostly on in the late afternoon and early morning. We are starting to be a bit busier with water taxi trips. Among other things yesterday and today were 30 people over to a lodge across the bay for a wedding. Also a trip to Halibut Cove with a load of summer supplies. 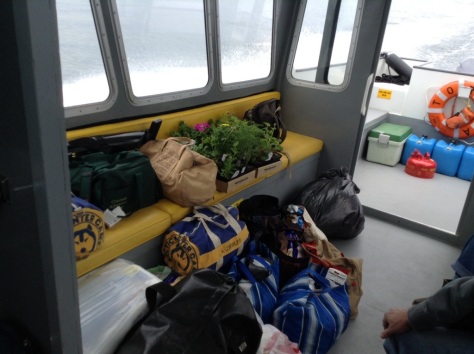 Today a trip to Bear Cove including a Hawaiian outrigger canoe. You can see the canoe and load of stuff in front of the boat.

It is almost as long as the boat. 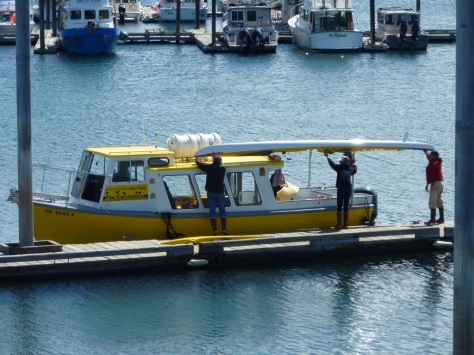 Yesterday we did a bird trip. The highlight was a Yellow-billed Loon and a close look at an Aleutian Tern sitting on a small stick and threatening to sink it. Gull Island yielded great looks at Tufted Puffins and a flyby of a Horned Puffin. We also spotted a juvenile Rhinoceros Auklet flying with Common Murres on our way back to the spit.

On today’s bird trip we also spotted a Yellow-billed Loon and Aleutian Terns. In addition we had good looks at two Kittlitz’s Murrelets and four Horned Puffins at Gull Island. 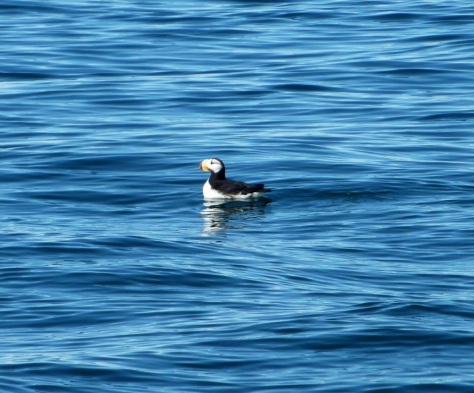 Here is a list for the last two days.

A pretty good trip today. The Aleutian Terns did not get as close to the boat today as they did yesterday but there were a few foraging. Also had a couple of fleeting glimpses of Kittlitz’s Murrelets. The highlight was two Yellow-billed Loons, one juvenile and one in breeding plumage. I was able to get a good enough shot of the juvenile to tell what it was but needed a longer telephoto for the other one.

Gull Island was busy. Lots of Murres and Kittiwakes. We didn’t see a Horned Puffin today but there have been a few showing up in the past few days.

The wind finally died down but it was raining. The couple that made the original reservations were not interested in going in the rain. That was okay since I don’t enjoy complaining. Five others were happy to do the trip. As in most cases when someone drops out because of the weather we usually have a good trip despite the rain. We had close looks at Aleutian Terns and decent looks at Parasitic Jeagers. There is a pair that nests near Eagle Lake at the head of the bay. One or both of them are seen through out the summer periodically. Here is a photo of one of them. I think I need a better camera!

As we were heading across to another part of the bay we ran across a single Brant intent on eating seaweed. We got very close to it. Usually they fly away if you get within 100 yards.

We were also very fortunate to see two Kittlitz’s Murrelets. They are often difficult to find this time of the year. The best chance is the last week of June through the middle of August. Unfortunately the Arctic Terns nesting on the beach at Glacier Spit were nowhere to be seen and there were two Bald Eagles there.

Heading into the harbor we saw the state ferry Kennicott at the dock. That means that the other state ferry Tustemina is doing its bi-monthly trip to Dutch Harbor. Someday I hope to do that trip. Maybe when I retire! 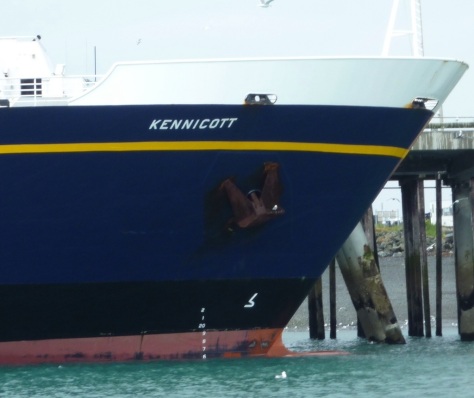 We had a group of 10 today, all part of a tour group. Perhaps the weather was too nice. Other than some good looks at Aleutian terns there were mainly the usual ones we see.

Only two today but despite the fact that the wind started early we got good looks at Aleutian Terns and watched them hunt for fish. They don’t forage the same as Arctic Terns. Their flight is a little more gull like, they are darker grey than the Arctic Terns and they don’t plunge dive for fish. They just dip down and catch fish on the waters surface.

No shorebirds were seen on the last three trips. They are off to the Arctic nesting. We will see some of them back through here in late June through mid August.

Here is the list from the last three days: